The National Executive Committee (NEC) elections have started. Ballot papers should have reached you by email already and by post by next Friday. They have to be returned by 5 August.

Only full Labour Party members who joined before 24 June this year will receive a ballot.

It is essential you remind all mainstream Labour members you are in contact with to vote, and let them know who our recommended candidates are. Control of the NEC is finely balanced and we need mainstream candidates elected to ensure the Hard Left do not use the NEC to advance their factional interests within the party.

Every full member of the party can cast six votes for the CLP section of the NEC. We recommend support for these six candidates:

Councillors can also cast two additional votes in their own separate section. We recommend the following two candidates in the local government section:

Here is a link to a model “Get Out the Vote” letter: https://gallery.mailchimp.com/271f6fffa61efcfd965911e04/files/NEC_GOTV_Letter.docx.
We want you to post or email this in your own name to anyone you know in the party to encourage them to vote in the election. If you are a councillor or MP etc. with legitimate access to the membership list for the area you represent you are entitled to send an email of this nature to the whole membership list. Similarly CLPs that nominated our candidates can send a recommendation on which way to vote to their whole membership. 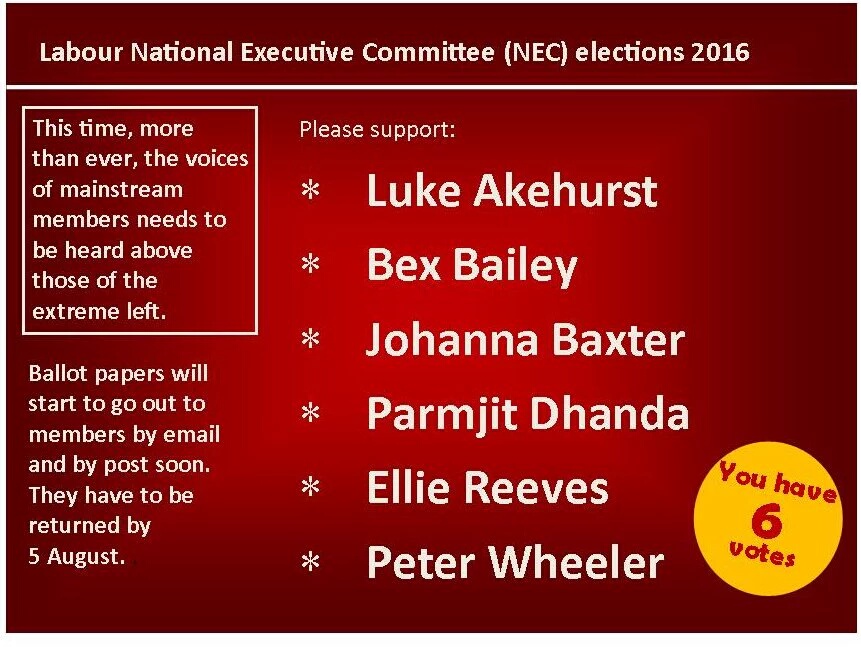 The NEC meeting on Tuesday and the subsequent NEC Procedures Committee have agreed the following rules for who can vote for Leader:

Individual members of the Labour Party who joined on or before 12 January this year.

Members of affiliated trade unions, socialist societies and other affiliated organisations who individually sign up as an affiliated supporter to the Labour Party. They must have been a member of that organisation on or before the 12 January 2016.  Affiliated supporters already on the Party’s membership system will be eligible to vote, subject to affiliates reconfirming their eligibility and that:

New affiliate supporters may be recruited from membership of affiliated organisations and socialist societies (as at freeze date) by 8th August 2016.

We will send round the link for people to sign up as Registered Supporters as soon as it goes live.